Harpoon Hannas was built in 1983 by Mr. Frank Hanna. Over the past 30 years Harpoon Hanna’s has been recognized for numerous awards including the prestigious “Top 100 Restaurants in the USA” by Restaurant Hospitality Magazine.

Harpoon Hanna’s has a legendary reputation for serving the freshest fish and seafood available. Certified Angus beef, all-you-can-eat crab legs, baby back ribs, poultry, pasta and children’s selections round out a menu built to satisfy your entire group.

The past 30 years has brought many changes but one thing remains the same. Harpoon Hanna’s is a family restaurant. Our focus is to remain an affordable, casual restaurant while also offering the highest quality food and beverages available. Friendly and efficient service has been the foundation of our success and our management staff is always available for any suggestions or concerns.

Over one hundred years ago several suicides and accidental deaths took place that puzzled detectives and the public alike. But were they really suicides? If not, who were responsible for these vicious acts? How are these deaths connected to the Titanic disaster months after the fateful voyage? 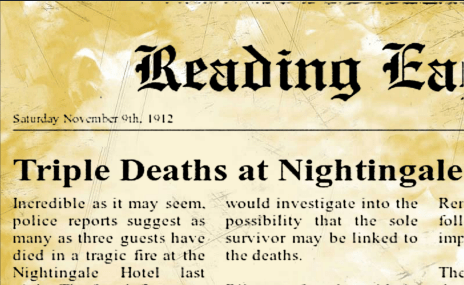 The guests thought they were there to see a lecture on the Spiritualist Movement, a time when the Spiritualist thought they could talk to the recently departed! Instead, they and their hosts, The Magic and Murder, Co., lead you on a spiritual journey into the unknown in order to solve a murder from more than ten decades ago!

When you are there you will have to decide for yourself, what is real and what is illusion?

Guests will be lead from each room to the next in search of clues left by the spirits of the past. Clues to the murderer of a young woman (and perhaps more still!) will be revealed each step of the way until one of the guests is able to look to within for the answer!

Do you have what it takes?

This site uses Akismet to reduce spam. Learn how your comment data is processed.